Calling it Quits – Termination of Contracts 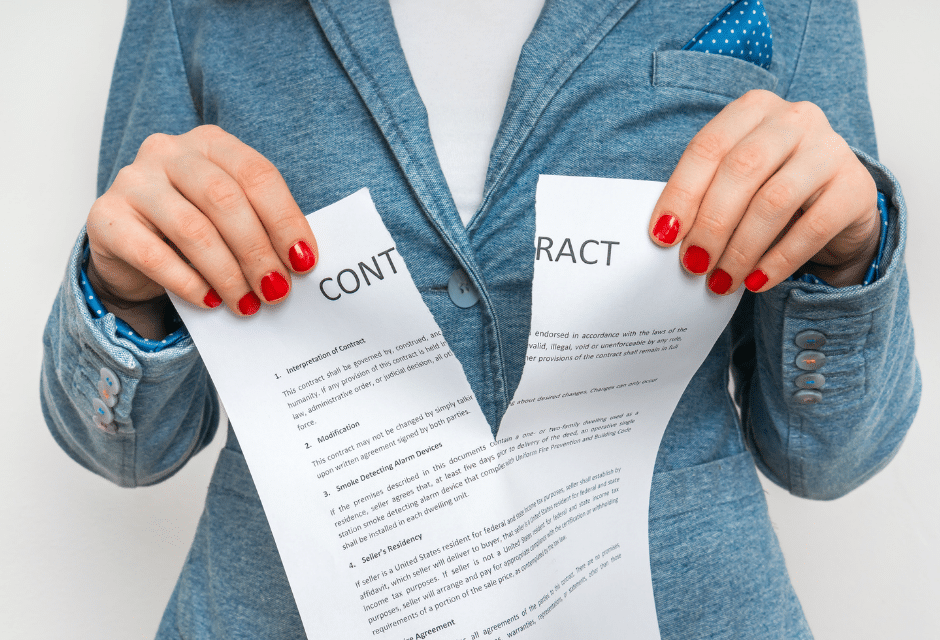 A commercial contract, in simple terms, is a legal binding agreement between at least two parties and is an essential element of any business. Such contracts are entered into by parties in order to protect their interests and to guarantee that their mutually agreed obligations are enforceable by law.

However, with time, circumstances and business needs change and as a result, one party may seek to absolve any continuing obligations. For instance, one party may not be fulfilling their duties, or the contract may no longer be commercially beneficial. Either way, it is important to carefully consider the legal and commercial consequences of terminating a contract and it’s not quite as simple as walking away…

The terminating party must elect to exercise their right to bring the contract to an end. This right either arises either by express terms of the contract or by common law. Common law is the part of English law that is derived from custom and judicial precedent rather than statute.

The contract itself may include a specific provision, for instance where there has been a ‘material breach’ of the contract terms, which give the parties the express right to terminate.

At common law, parties will have the right to terminate the contract on the grounds of a serious breach:

Contractual and common law rights to terminate are not the only methods which allow a contract to be brought to its end. The contract may be terminated by agreement of both of the parties – which is exactly what it says on the tin! Any discussions should be treated with care and early advice and help with negotiation should be sought.

Terminating a contract should not be taken lightly. It can be a very drastic step. If a party gets it wrong and terminates the contract without the right to do so, it may amount to a repudiatory breach. This will give the other party the right to claim for wrongful termination. This means that once the contract has ended, they will be able to sue for damages.

Here’s where 2020 Business Law comes in…

Nobody enters into a commercial relationship assuming that it will fail. In an ideal world, contracts would end when they are supposed to – after both parties have fulfilled their obligations, but this is not always the case. Unfortunately, the business world is complicated, and it is important that your required contract reflects this.

At 2020 Business Law, we help business owners make the right decisions for their business. If you would like to know more about business contracts, or just want to discuss your options, then please get in touch with us today.  Email info@2020businesslaw.co.uk, or call : 01980 676875

We use cookies on our website to give you the most relevant experience by remembering your preferences and repeat visits. By clicking “Accept”, you consent to the use of ALL the cookies.
Cookie settingsACCEPT
Manage consent

This website uses cookies to improve your experience while you navigate through the website. Out of these, the cookies that are categorized as necessary are stored on your browser as they are essential for the working of basic functionalities of the website. We also use third-party cookies that help us analyze and understand how you use this website. These cookies will be stored in your browser only with your consent. You also have the option to opt-out of these cookies. But opting out of some of these cookies may affect your browsing experience.
Necessary Always Enabled
Necessary cookies are absolutely essential for the website to function properly. These cookies ensure basic functionalities and security features of the website, anonymously.
Functional
Functional cookies help to perform certain functionalities like sharing the content of the website on social media platforms, collect feedbacks, and other third-party features.
Performance
Performance cookies are used to understand and analyze the key performance indexes of the website which helps in delivering a better user experience for the visitors.
Analytics
Analytical cookies are used to understand how visitors interact with the website. These cookies help provide information on metrics the number of visitors, bounce rate, traffic source, etc.
Advertisement
Advertisement cookies are used to provide visitors with relevant ads and marketing campaigns. These cookies track visitors across websites and collect information to provide customized ads.
Others
Other uncategorized cookies are those that are being analyzed and have not been classified into a category as yet.
SAVE & ACCEPT
Powered by